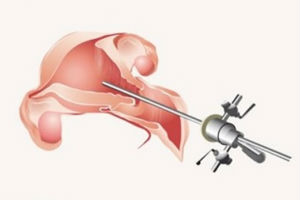 Infertility is a complex condition which can have multiple causes. A comprehensive examination of all possible causes of infertility includes an analysis of the general health of a couple, as also a detailed and thorough assessment of the woman’s reproductive tract including the uterus, fallopian tubes, ovaries & the vaginal canal in addition to her hormonal profile . While most of this information can be obtained through a combination of clinical examination, blood tests & a good pelvic ultrasound, the assessment of the inside of the uterine cavity & cervical canal requires the use of an advanced technique called Hysteroscopy. Hysteroscopy involves the use of a special instrument – A Hysteroscope, to not only visualize the cavity of the uterus and cervix but also simultaneously treat some of the pathologies that may be detected at the time of visualization.

Very often, certain conditions that cannot be detected by routine physical examination, may be detected through hysteroscopy and can then also be corrected immediately, avoiding the need for a repeat surgery. Hysteroscopy has thus  become a frequently recommended procedure for the evaluation of infertility, recurrent miscarriages and abnormal uterine bleeding.

Hysteroscopy is generally undertaken for :

What is a Hysteroscope ?

A Hysteroscope is a narrow, telescope-like instrument having a camera and an integrated light source. It is inserted into the uterine cavity through the vagina and the cervix and enables the doctor to visually examine the cavity of the uterus & cervix, the Endometrium and the ostia. The images are displayed on a monitor, which helps the doctor to also conduct any procedure or undertake any corrective surgery, as required.

What happens in Hysteroscopy ?

Hysteroscopy is generally undertaken by a Gynaecologist in the Operation theatre after the patient has been administered anaesthesia. The cervical canal is gradually dilated by stretching till it is possible to introduce the hysteroscope into the uterine cavity. This procedure does not involve any incision or cut over the cervix. Once the cavity of the uterus has been distended by introducing fluid, to enable a better visualization of its contents, the doctor carefully examines the cavity and the lining  of the uterus, so that any abnormality that is detected can then be treated accordingly. The doctor may also decide to take a biopsy from any area that appears visually abnormal and send the tissue to the lab for testing. The hysteroscope is withdrawn after the examination and the patient can usually go home 4-6 hours after the procedure. Occasionally, an overnight stay in the hospital may be recommended for exceptional cases.

Nowadays the option of office hysteroscopy, which is undertaken in the OPD without anaesthesia, is also becoming available. In this, a very narrow Office Hysteroscope (of diameter less than 5 mm) is used, but only for diagnostic purposes. Any operative intervention, if needed, must be undertaken later in the OT under administration of anaesthesia.

What can be expected after the procedure ?

Usually, one may be discharged from the hospital on the day of the procedure itself. One may experience mild pain in lower abdomen or some cramping for a few days along with a little bit of vaginal bleeding or spotting. The doctor may prescribe some medications for these.

In most cases, one is able to resume normal physical activity in a couple of days unless the doctor specifically advises otherwise. Restarting sexual activity may however take a while depending upon the findings of the hysteroscopy.

What are the risks involved?

Hysteroscopy is a relatively safe procedure when undertaken by a competent gynecologist. A few unforeseeable complications may however occur in rare cases:

Serious or life threatening complications are however extremely rare and Hysteroscopy is generally considered a very safe & effective way of diagnosing gynaecological or fertility problems. In case of any concerns, whatsoever, it is advisable to discuss all the issues with the doctor before deciding to undergo a hysteroscopy.

12,619 thoughts on “Benefits of Hysteroscopy in Infertility”