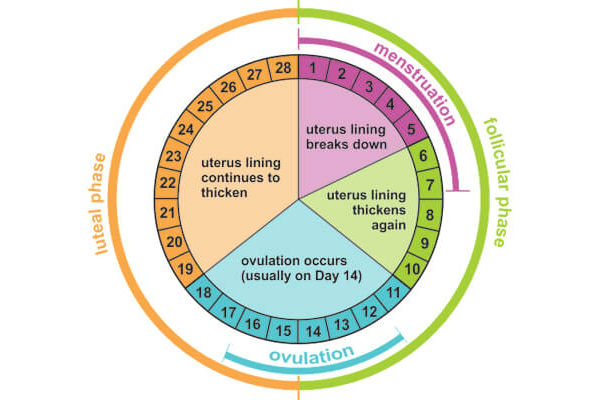 Menstruation is the periodic & cyclical shedding of the uterine lining, i.e the Endometrium, in women, accompanied by  loss of blood. Usually, it takes place at an interval of 28 days, although this  interval may normally range from 21 to 35 days in some women. The blood flow lasts between 4-5 days, but again a variation in the duration between 2-7 days is considered normal.

The menstrual cycle is linked to the production of various hormones in the body, which regulate the various reproductive & other body functions including the preparation of the uterus for pregnancy. Menstruation thus represents the breakdown & casting off of  an endometrium prepared for pregnancy, which has not materialized. As such, menstruation has even been described as the ‘weeping of a disappointed uterus’. 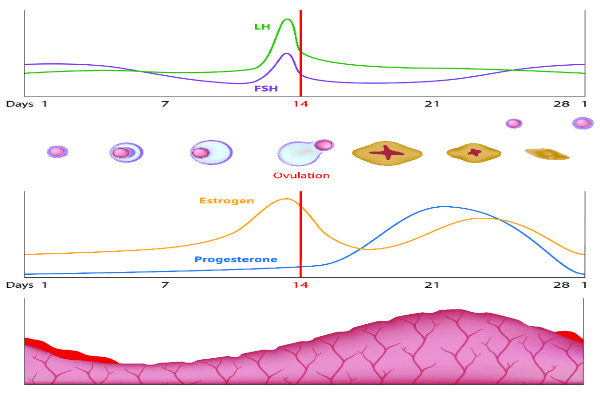 The cyclical occurrence of menstruation is controlled by the cyclical rise & fall of various hormones in the body. It is interesting to note that every girl is born with a certain fixed number, about 2 million, of eggs (Primary oocytes). This number further reduces by the time of puberty to about 300,000 to 500,000 due to the spontaneous atresia & destruction of oocytes. Out of these, it is estimated that no more than 500 oocytes will actually mature in a woman’s lifecycle & the rest will simply degenerate. The maturation, release & disintegration of oocytes as well as the growth and shedding of the endometrium during the menstrual cycle is controlled by hormones produced in the brain & the ovary.

In the first half of the cycle, under the influence of Follicle Stimulating Hormone ( FSH), produced by the Pituitary gland in the brain; the oocyte/egg begins to grow in the ovary. This growing oocyte produces more & more of the hormone Estrogen, which stimulates the growth of the uterine lining (Endometrium) and also affects the cervical mucus making it thin & stretchy. Estrogen also plays an important role in maintaining bone health & cardiac function. This phase of growth of the oocyte i.e the follicle,  is called the Follicular phase. It is also called the Proliferative phase from the perspective of the uterine lining as at this time the Endometrium grows and proliferates to prepare itself for the implantation of a pregnancy, if fertilization occurs.

It  takes an oocyte about 14-16 days (sometimes a little longer or lesser) to reach maturity & be ready for release by the ovary. At this time, it is surrounded by a capsule of Granulosa and Theca cells in the ovary. The process of release of oocyte from the ovary is called Ovulation. This process again is controlled by a complex interplay of hormones produced by the Pituitary gland & the ovary.

It is the sudden rise in Luteinising Hormone (LH), produced by Pituitary gland in brain, which is the principal trigger for ovulation. The released oocyte is picked up by the fimbriae of the Fallopian tubes and transported towards the uterine cavity. Once released, an oocyte can survive for approximately 24 hours.

Meanwhile, the remaining cells of the capsule of the oocyte in the ovary form a structure called the Corpus Luteum, which produces the hormone Progesterone. This hormone is responsible for further growth of the Endometrium and, along with Estrogen, makes it suitable for nurturing a pregnancy. Under the influence of Progesterone, the Endometrium becomes edematous, more vascular, the glands enlarge & secrete nutritious substances into the stroma so as to provide nourishment to a growing uterus & pregnancy. This phase, that occurs after ovulation, is called the Luteal phase or the Secretory phase of the menstrual cycle.

If the oocyte is fertilized within its survival period by a sperm, then the fallopian tube transports the zygote towards the uterine cavity where it gets implanted & the pregnancy  progresses. If  however,  the  oocyte  is  not fertilized, it degenerates after 24 hours. In the absence of fertilization, the Corpus luteum gradually disintegrates and the levels of Progesterone & Estrogen fall. This leads to a shrinkage and disintegration of the glands and superficial layers of the Endometrium. Eventually, the necrosed superficial layers of the Endometrium & the ends of blood vessels in these layers, breakdown &  the bleeding starts. This marks the beginning of the vaginal bleeding, which is counted as the first day of menstruation. Simultaneously the next oocyte starts to grow in the ovary and the whole cycle is repeated.

The cyclical production of hormones during the menstrual cycle leads to various cyclical changes in a woman’s body & these changes have been studied and used for predicting the ovulation & the fertile/unsafe or safe period while planning to achieve or avoid a  pregnancy.

Cervical mucus changes-  The cervix is the terminal part of the uterus which leads into the vagina. It is lined by several glands which secrete mucus under the influence of hormones. The cervical mucus plays an important role in fertility because it gets altered in character & amount depending on the influence of the hormones. In the days immediately after menstruation, the cervical mucus is dry & scanty. Gradually, under the effect of Estrogen, it becomes profuse, watery & stretchy. This happens around the time of ovulation & it facilitates the passage of sperms from the vagina into the uterus while also nourishing the sperm at the same time. This increases the chances of conception when the sperm fuses with the egg.  After ovulation, in the premenstrual phase, the mucus becomes sticky, dry & thick; thus preventing any further entry of sperms into the uterus. This change in character and amount of cervical mucus has been often used to predict the fertile period. 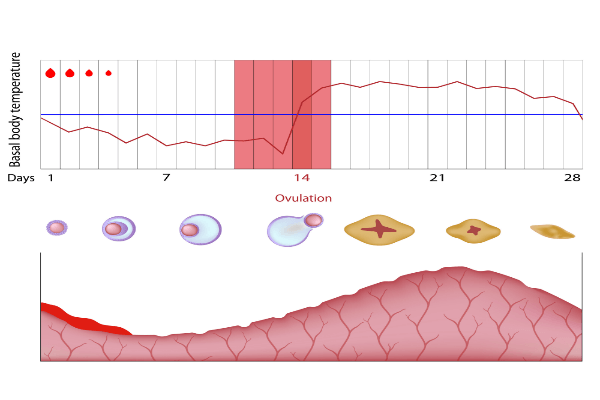 8,777 thoughts on “All about Menstruation and Fertility Cycles”